Evacuations were ordered as a volcano on the largest island of Saint Vincent and the Grenadines in the Caribbean Sea threatened to erupt.

Heavy ash and the stench of sulfur began to blanket parts of the eastern Caribbean island of St. Vincent Saturday as scientists warned that Friday’s explosion at La Soufriere volcano could be the first of many and thousands continued to evacuate the area.

“The first bang is not necessarily the biggest bang this volcano will give,” said geologist Richard Robertson of the University of the West Indies’ Seismic Research Center, during a news conference.

Satellite images showed La Soufriere’s plumes visible from space as the threat of more seismic activity displaced an estimated 16,000 island residents who fled with hastily stuffed suitcases, backpacks and shopping bags toward coastal shelters and cruise ships prepared to ferry them to neighboring islands that had offered to take them in.

So far, no deaths or injuries have been reported, and Prime Minister Ralph Gonsalves appealed for calm and continued vigilance against COVID-19 as damage from the 4,000-foot-high volcano, at St. Vincent’s northern end, threatened to disrupt life on the island for at least several months.

“Agriculture will be badly affected, and we may have some loss of animals, and we will have to do repairs to houses, but if we have life, and we have strength, we will build it back better, stronger, together,” Gonsalves told local station NBC Radio. 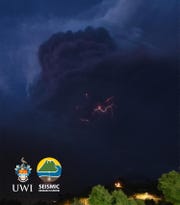 Activity increased dramatically at the volcano starting Thursday, according to Weather.com. A series of earthquakes were indicated magma rising upward as seeping gas and steam portended an eruption.

Barbados, Antigua, Guyana and St. Lucia were among those that had offered to open their borders to evacuees arriving via Carnival and Royal Caribbean boats. 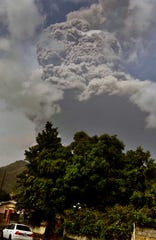 Plumes of ash rise from the La Soufriere volcano on the eastern Caribbean island of St. Vincent on Friday. (Photo: Orvil Samuel, AP)

The volcano’s last significant eruption was in 1979, and a blast in 1902 claimed the lives of more than 1,600 people – just hours before Martinique’s Mount Pelee volcano exploded 90 miles away, killing nearly 30,000 in one of the deadliest blasts in recorded history.

St. Vincent is part of an island chain that includes the Grenadines and a population of more than 100,000.

MANILA, Philippines — The Philippines has lifted a ban on the deployment of workers to Saudi Arabia, which it imposed

NFTs Linked to Nobel Prizes Are Being Auctioned by Berkeley

As the Hamptons Booms, a New World of Luxury Problems

Australia says citizen is in arbitrary detention in China

Underrated TV Shows From 2020 To Watch

How Do I Stop Children From Playing on My Property?

Cherry blossom season kicks off around the globe

Take a look at beautiful photos of the pink and white trees around the world. &#…

The Monopolist Worm in Apple

There is a lot to admire about Apple, but my company, Spotify, has seen another,…

'A serious threat': Plastics we use every day are leaching hazardous chemicals, report says

The plastics we use every day contain and leach hazardous chemicals, including c…