Prince Harry and Oprah Winfrey are wrapping up their mental health series “The Me You Can’t See” with a final town hall episode.

“The Me You Can’t See: A Path Forward” premiered on Apple TV+ Friday and included a forum-style conversation between the Duke of Sussex, Winfrey, an advisory board of mental health experts and guests like Glenn Close and Robin Williams’ son Zak Williams.

The royal and the media mogul tackled topics such as suicide, shame associated with mental health and how the pandemic has shifted the world’s view of mental illness.

Glenn Close gets real about COVID’s impact on mental health

Close told Winfrey and Harry that she feels “blessed” to have lived in a bubble with her family for more than a year during the COVID-19 pandemic, and noted it has directly affected her mental health.

“We have gone through an amazing, unprecedented time now. For me I think this is a a big of a shift in the world as 9/11 was,” Close said. “It will take us a while to be able to articulate to ourselves what the result of that has been on us as individuals.”

Harry agreed, saying that the pandemic has changed the stigma of mental health.

More: Prince Harry said he turned alcohol and drugs to cope with a ‘nightmare’ time in his life

“I think pre-COVID there was probably a situation of an us and them when it came to mental illness and now it is just us,” Harry said. 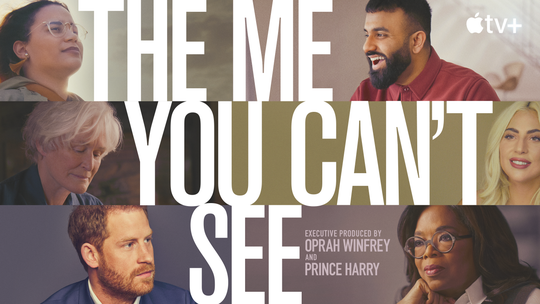 Prince Harry and Oprah Winfrey will premiere their mental health documentary series on Apple TV+ on May 21. (Photo: Apple TV+)

Close also discussed how her sister disclosed to her she was suicidal. The actress said she had “no clue” her sister was going through a mental health battle, and Harry agreed there can be “shame” associated with not being aware of the struggles family members are going through.

“As parents, as siblings, certainly from what I’ve learned – there’s an element of shame we feel, because we’re like, ‘How could we not have seen it? How did we not know? How did you not feel comfortable enough to come to me and share that with me?’ ” Harry said. 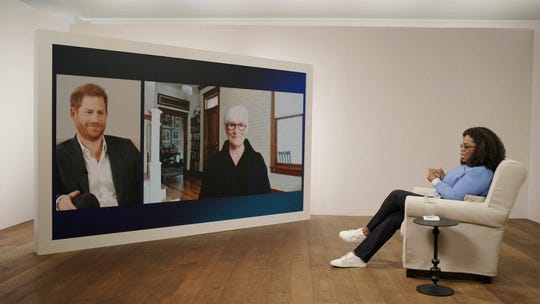 Prince Harry and Oprah Winfrey chat with Glenn Close about mental health and the impact the pandemic has had on individuals. (Photo: Courtesy of Apple)

Harry was 12 years old when his mother, Princess Diana, died in a tragic car wreck in Paris.

In the premiere episode of “The Me You Can’t See,” Harry said he was enraged by the circumstances of his mother’s death and “the fact that there was no justice, at all.” “The same people that chased her into the tunnel photographed her dying on the backseat of that car,” he said.

During the town hall, Harry said he felt like he and Williams, who lost his Oscar-winning father Robin Williams in 2014 to suicide, had a shared experience of grieving their parents with the rest of the world.

‘His brain was so compromised’: Robin Williams’ widow describes his ‘devastating’ final days in new doc

“From my end, it was really hard to separate, initially, the process of privately grieving versus sharing the grieving with the general public,” Williams said. “I had trouble differentiating that grieving process at first and it was really challenging for me, I found myself extremely emotionally dysregulated.”

Williams said after losing his father, he was “self-medicating” with drugs and alcohol and was diagnosed with PTSD.

“I really didn’t get a chance to focus on the private grieving process until about a year and a half after my dad passed away,” Williams added.

Prince Harry said he could relate because of his feelings when his mother died in the public eye.

“When you see so many people around the world grieving for someone they feel as though they knew them better than you did in a weird way because you’re unable to grieve yourself,” Harry said. “It’s like, how are you grieving more for someone who was my parent and I’m unable to grieve myself?”

If you or someone you know may be struggling with suicidal thoughts, you can call the U.S. National Suicide Prevention Lifeline at 800-273-TALK (8255) any time day or night, or chat online.

MANILA, Philippines — The Philippines has lifted a ban on the deployment of workers to Saudi Arabia, which it imposed

NFTs Linked to Nobel Prizes Are Being Auctioned by Berkeley

As the Hamptons Booms, a New World of Luxury Problems

Australia says citizen is in arbitrary detention in China

Electric Cars Are Coming, and Fast. Is the Nation’s Grid Up to It?

Leigh Perkins, Who Built Orvis Into a Lifestyle Brand, Dies at 93

What’s on TV This Week: ‘9to5: The Story of a Movement’ and ‘The Equalizer’

Here’s how this quiz works: All you’ve got to do is type the names o…

Channning Tatum Strips Down For On Set Selfie

“I’m flexing so hard I got a cramp.” Channing Tatum is leaving…

Suggested by tkinney9 Let’s face it, without Jolie, these movies would be …